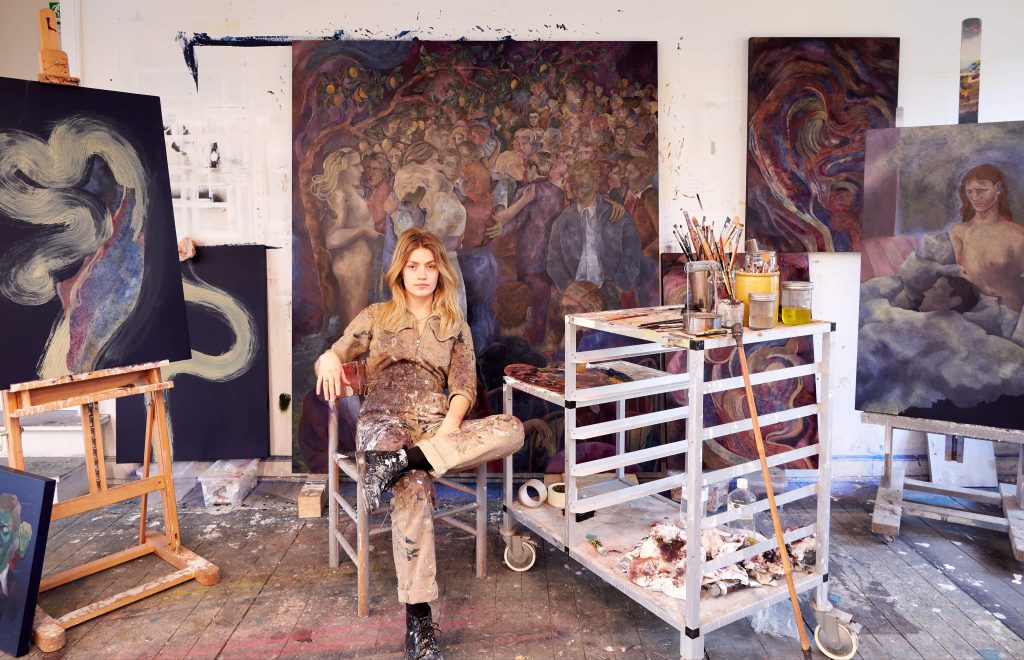 Get to know the Danish painter Eva Helene Pade after her first ARTUNER exhibition Uno Nessuno Centomila, taking place at Palazzo Capris during the Artissima week in Turin. Scroll down to read more about metaphysics, crowds, and the artistic process, as the artist lets us into her world.

Ludovica Colacino: Let’s start from the very beginning, the Genesis of your art. Could you tell us more about your creative process?

Eva Helene Pade: Well, the process can differ quite a bit when it comes to getting the ideas for the pictures, or the figurative part of the painting; it’s quite random.

It’ll often be one subject that I find interesting that I want to dig into, or I will be drawing on personal events from my own life. Sometimes I will know what I want to draw and what emotions I want to be specific or present, then I will always have some figures or characters that are acting accordingly. And they will often be quite strong, dramatic emotions. So I will start, normally, just with the general idea and some theory, like read about some subjects I find interesting.

For the middle installations [Danse Macabre #2, #3, #4], I knew that part was more planned because it was just me wanting to engage and activate the viewer within the piece. That forces [the artworks] into a narrative because then the viewer can take part in [the composition], enhance what’s going on – maybe bounce back on the emotions from the paintings and bounce them back to the painter. So, there, I needed to do a lot of planning.

I won’t plan out the faces like in the crowds, though; they just happen on the brush.

LC: Your paintings have very intricate compositions loaded with details of your brushstrokes. I can imagine it’s simple to get carried away and paint endlessly. Is there a moment when you know that a painting is finished?

EHP: I think it can be, but for some paintings, you just know. With the green painting in the middle, for example, I was planning to paint her face or do something more in the bottom, so I just left it there while I worked on the other characters. Eventually, I looked at it and told myself it was perfect.

So it’s not very rare for me to wipe the paint off, do it again, wipe it off – I’m getting better at allowing it to be what it is, which is an important part. However, there needs to be something that always feels undone, at least to me, even if people won’t see it.

Sometimes, you just need other people to tell you that a painting is finished. My professor once said, “You’re not allowed to touch that painting [ A Story to be Told (Danse Macabre #1)] ” – and I didn’t, and then it was done. So, sometimes, that’s what you need. 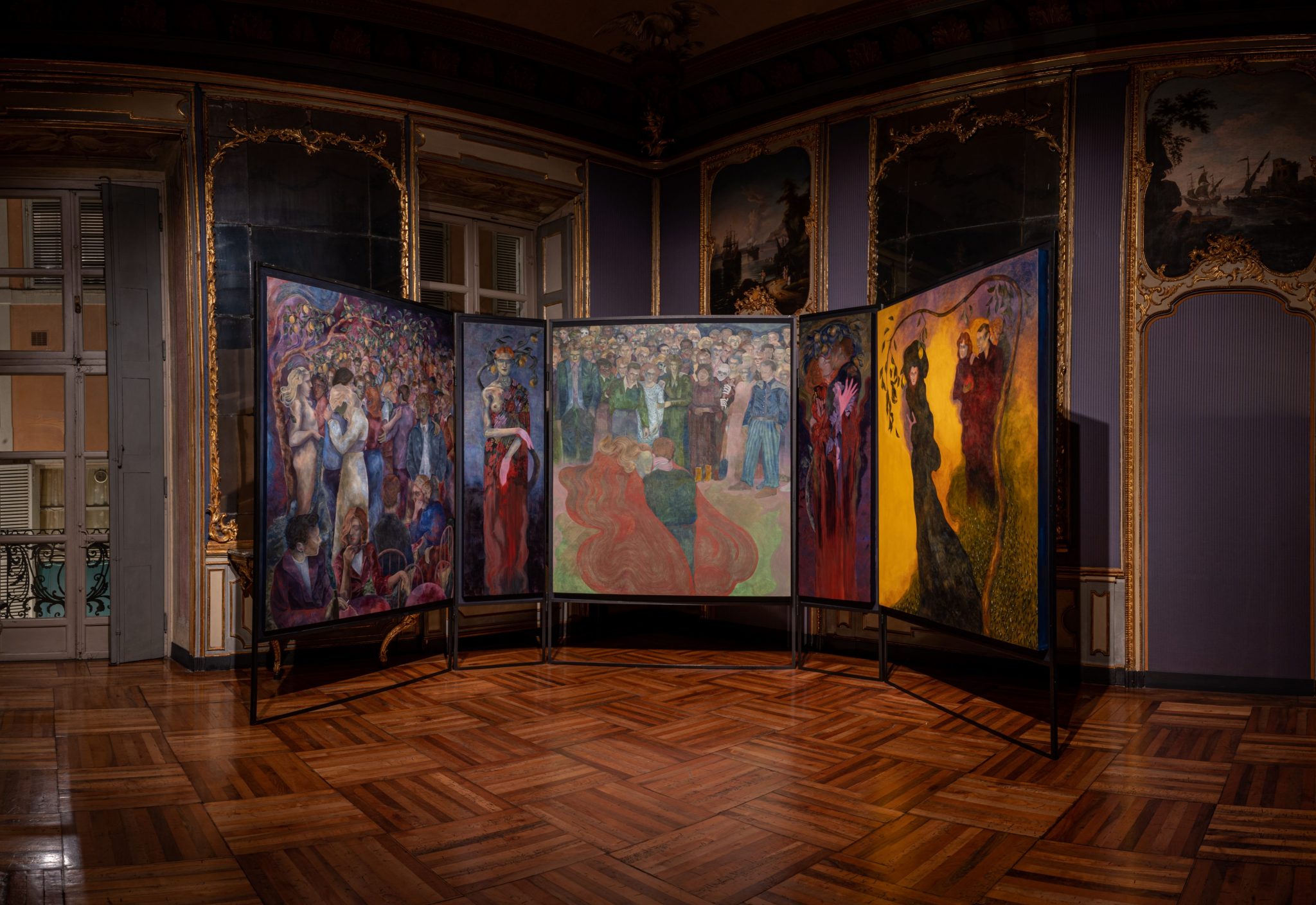 LC: When looking at your art, there are a few elements that are reminiscent of specific painting styles in art history. Could you tell us more about your inspirations?

I knew I wanted some references to pop up; I often have either a very clear or more subtle reference to art history. In the big one in the middle, Danse Macabre #3, there is a quite literal painting of one of Gustav Klimt’s skeletons.  I will have, you know, a lot of inspirations from art history – Munch and the overall darkness of Scandinavia, for example. And then I have James Ensor, who I admire a lot as well for the political satire in the paintings.

I think it’s good to use art history to enhance emotional sense because people will be sort of familiar with it. Or, it will open up a lot of images in their mind of what they should be thinking when seeing the piece.

LC: Totally. I would say that referring to artists of the calibre of Klimt and Munch can create a sense of familiarity in the viewers. When they go and approach your art, you can tell it becomes an encounter with something that is already known.

EHP:  Yeah, and I think similarities open up some paintings, but I like the metaphysical, too. When I start a painting, the process can happen quite spontaneously and sometimes quite quickly. Or like in a dream, the painting has this metaphysical quality to it – like an ambiguity – which I like.

I don’t like painting backgrounds; it would be strange for me to paint  [the people] inside a salon, or on a dance floor – that would just feel like noise to me.

I prefer for it to completely surrender to the more metaphysical parts of the paintings, which would just enhance what’s already there. I will always paint shapes and swirls, which are related to the characters as well since they are also made of swirly brushstrokes. The characters, often, don’t have funny shapes or metaphysical faces – they don’t look completely here. 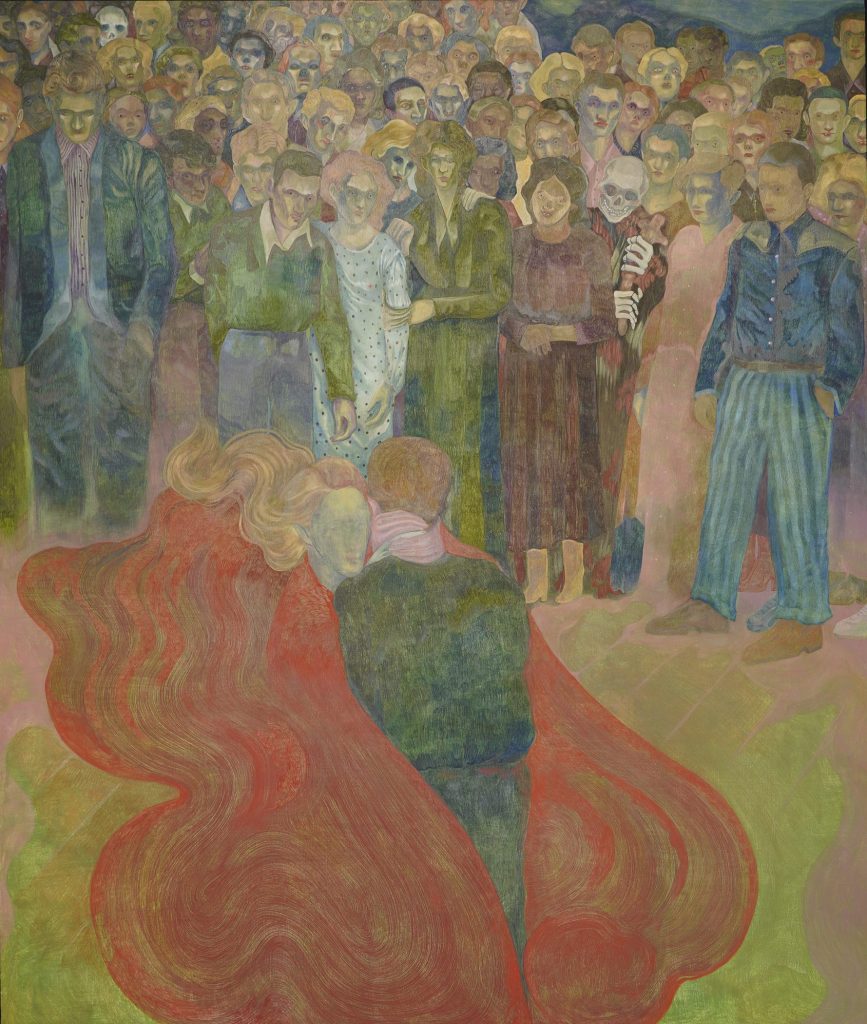 EHP: Yeah, exactly. Like it’s enough and you understand it, and you believe it.

LC: You did mention that sometimes the subject comes from a personal experience. So, I guess, using that in an artwork can create a space for vulnerability.

EHP: The viewers can recognise themselves – I think it’s easier, sometimes, with figurative painting, because you see a face and you can read it. So it’s very human, it feels very natural to relate. I feel like people feel safer sometimes: the best thing that can happen is that people have a deeper connection with the painting. That makes people very happy, and they will tell you about it. It makes me think “Okay, I did something today”.

LC: What are your plans for the future? Is there a project you are working on right now?

For the show that I’m doing [at Nicolai Wallner Gallery], I’m doing a painting that’s 4.5 metres tall and 5 metres long, and then some other big paintings. I’m not doing a standing installation, so I will be trying to overwhelm the viewer in another way. It will be about the crowds as well, but this time we’ll have more of a carnivalesque or theatrical story. I’ve been reading a lot about the idea and theories about crowds, what it means to be in a crowd or the emotions of being in a crowd.

LC: Crowds are such a fascinating subject.

EHP: Yeah, and it keeps being relevant. It keeps having such a bizarre relation to it. Of either mass celebration, mass confusion, or anger, which I think it’s really interesting. Also, the way that, in a crowd, you’re always observing each other as well – I like the gazes within the crowds. Because even though you’re one in many, you’re also being observed. 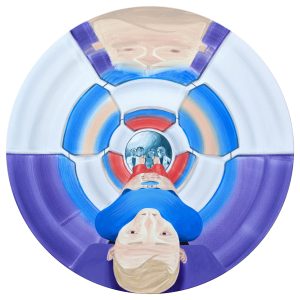 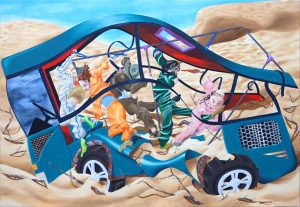 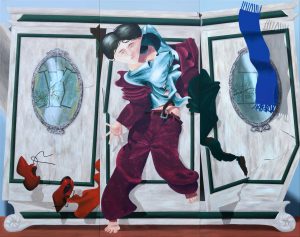 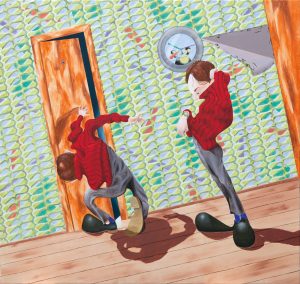 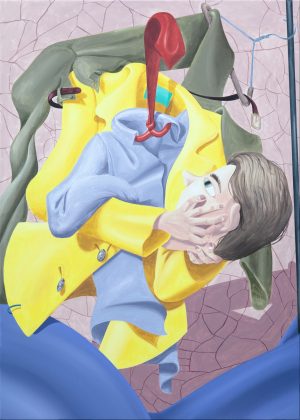 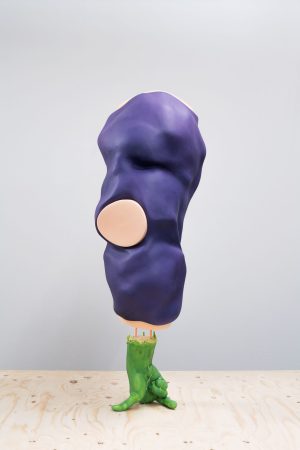 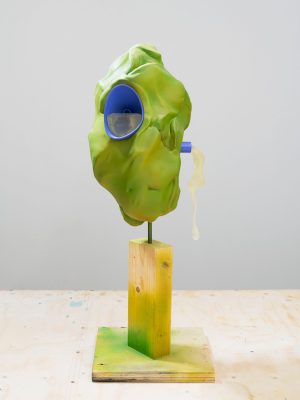 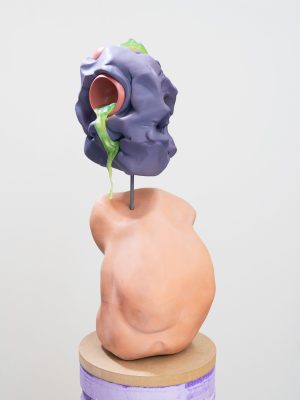 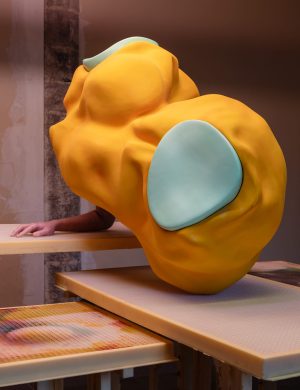 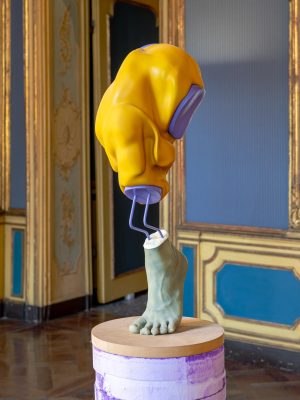 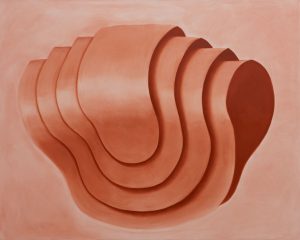 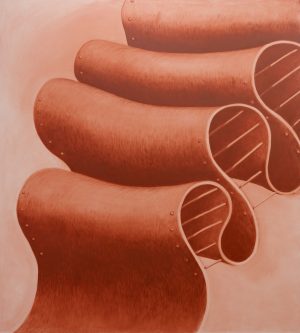 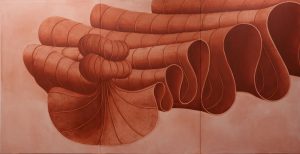 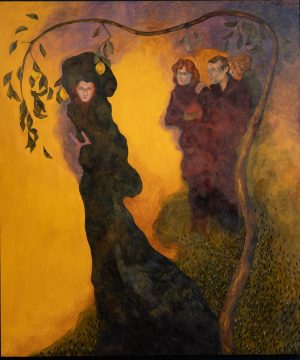 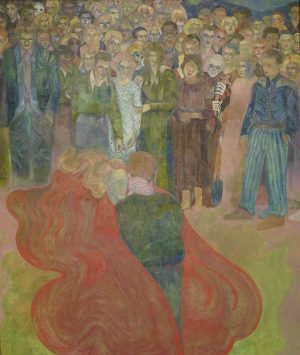 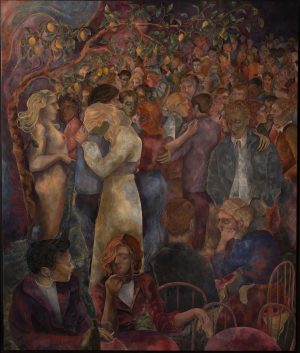 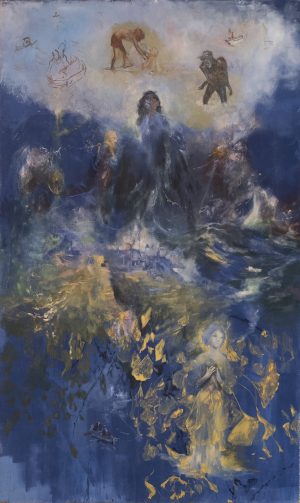 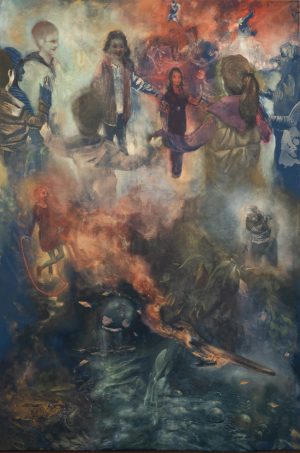